There are over 50,000 Scottish Scouts and this number has been growing every year for over a decade.

Scottish Scouting is divided into 8 regions as shown below. There is a scottish scouting wikipage you can visit, along with the SHQ national website.

Fife Scouts number approximately 3,000. Fife Scout Groups are in every corner of the Kingdom – and the number of Fife Scouts are growing! You can find your nearest Scottish Scout Group at Scouts HQ or Google for the scouts in your home town.

Fife Scouts are a part of the East Scotland Region who’s Regional Commissioner is Callum Farquhar.

There are 5 Fife Scout Districts. To the west of Fife the scout provision is provided by both;

The Scouts in the North of Fife are supported by North East Fife Scout District.

Each District Scout Badge is displayed below.

7 scout groups can be found in Glenleven District –

Kirkcaldy hosts a number of great facilities, including the Wemyss Firs campsite, water sports at Kinghorn Loch, and minibus hire from the Dunnikier Scout Group

For scout groups looking to go camping there is an abundance of scout camp facilities in Fife, from the small and excellently maintained Wemyss Firs Scout Camp site in Kirkcaldy Scout District, to the larger, suitably named, Nine Acres Campsite, Scout Campsite in Dunfermline District and the premium campsite at the Scottish Scout Headquarters in Fordell Firs.

This means 3 of the 5 Fife Scout Districts having campsites in their geographical area. The Wemyss Firs campsite is on the Standing Stane Road, Dysart. The site is normally booked by one group at a time due to it’s size, though some groups will share. The Kirkcaldy Scouts are always developing the campsite and introducing new activities, all of which are self-led, including orienteering, pioneering along with the must have campfire and tree swing. Get a feel for the site by visiting the Wemyss Firs Facebook page. 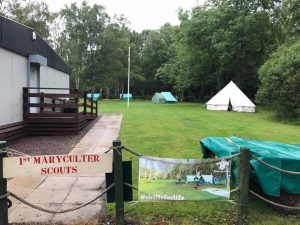 The Nine Acres Campsite has enough open space to accommodate 3 groups, with the most interesting area being the island. Located on the edge of Crook of Devon and is currently owned by 2nd Fife Scout Group. It is able to be used by all Youth organisations.

Scottish Scouts have their Head Quarters in the Rosyth Scout District, at Fordell Firs, there is even Rosyth Scouts in Fordell Firs! i.e. their group is based there, what a fantastic place for Rosyth Scouts to meet. The list of activities available at Fordell Firs Activity Centre are too numerous to mention them all but the 3G swing is probably one of the most popular.

The next site is not a scout campsite but is an excellent location to camp for a weekend. Pillars of Hercules. <more details to follow>

Scout Halls for a Sleepover

Indoor accommodation is available at Nineacres (for leaders) and Fordell Firs however other accommodation is limited to scout halls. Most Fife Scout Groups who own their own hall will be able to accommodate a visiting group for a night or 2. It is worth highlighting the St Andrews Scout Hall and Leven Scout Hall which are both located near swimming pools, the beach and public parks (along with shops for the essentials).

While we’re on the topic of retail therapy, it is worth mentioning the 3 Scout outlets in Fife. In Dunfermline District their local scout shop is located at St Leonard’s Church (Access off Woodmill Rd before junction at bottom of Queen Margaret Dr. Access through gate and small building on left hand side. All uniforms available (including Sea Scouts) and anything special can be ordered. All profits go to local scouting with Dunfermline Groups receiving a rebate annually. Cashless payment facility is now available.

Activities for Scouts in Fife 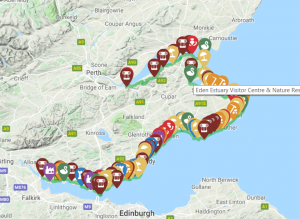 Take a visit to Fife Airport in Glenrothes, the welcome scout troops for a tour including a look atthe aircraft in the hangers and a sit in the airport fire engine, probably the smallest fire engine we’ve ever seen! 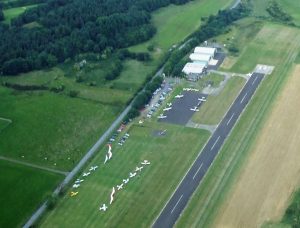 Whilst you can’t ski in Fife the easy access to this activity makes it worthwhile mentioning here. Skiing facilities are just a short distance away (Hillend, Edinburgh and Glenshee) which means Scouts in Fife have an excellent opportunity to learn and become proficient in skiing. Fife Scouters, like most, aim to carry out activities as cheaply as possible. Having free access to ski equipment is a definite plus. There’s free hire of ski equipment from the Cairneyhill Scout Group. If you’re planning on going skiing remember to pack some scout snow sports activity badges and staged activity badges. 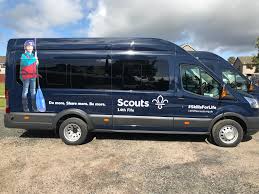 Transporting scouts to the various scout activities is always a logistical problem. Add skiing equipment and now you need a trailer. Fortunately the Cairneyhill Scout Group have 2 minibuses and a trailer for hire. The fee for using them covers their costs i.e. they are cheap. Visit the scout minibus hire webpage for more details.

Minibus. Life is so much easier when going on a scout outing if you have access to a minibus. In Fife there is a plethora of buses available –

Minibuses are also available from Fife Council schools, please contact the school for details of how to hire their bus.

Map of Scout Groups in Fife

This map displays most of the towns with a scout group in it, but there currently isn’t a map showing all the groups. 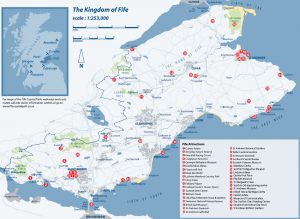 There is also an excellent District Scout Website and most of the groups have a scout website, Scout Group Facebook page or both, please see the table below for details. You can also click on each image below to expand.

The district is run by a strong leadership team headed by Dick Cook, District Commissioner.

Kirkcaldy doesn’t have an official Scout Shop. There may be a shop selling uniforms their range is limited and their prices can be higher than at the Glenrothes Scout Shop . Visit the Glenrothes Shop to get expert advice from the volunteer leaders who run the shop. Our stock of uniforms never runs out.

Dunfermline Scouts geographically runs from M90 motorway in the East to Kincardine in the West. There are 11 Scout Groups in the District, 7 of the Groups are located within the city of Dunfermline, while the other 4 are in the villages of Crossford, Cairneyhill, Limekilns and Carnock.

Dunfermline has an official Scout Shop run by Dunfermline District Scouts, which sells scout uniforms. Visit the Glenrothes Shop or Akelas Den if you want a larger range of products e.g. the items needed for going camping. Parents cam also get expert advice from the volunteer leaders who run the shops.

Rosyth Scout District has 8 groups, a District Explorer Unit and an Active Support Team. Details of each group can be seen on the Rosyth Scout Groups Page. Geographically one of the smallest, and in one of the most picturesque settings with the Forth and the bridges across it on their doorstep.

The District also has the Scouts Scottish HQ in the District and Fordell Firs Outdoor Activity Centre, a fantastic resource for scout groups throughout Scotland and beyond.

Rosyth District is also home to Akelas Den, a popular Scout Shop in the area.

Glenrothes and Levenmouth Scout District (shortened to Glenleven) has 7 scout groups. It is the smallest of the District, and like the rest is growing in size. Glenleven District is the home of the Glenrothes Scout Shop, ideally situated just off the A92 for all Fifers to visit. It’s open 6pm-7:30pm Tuesday and Friday along with 9am to 4pm on Saturdays.

Nestling between NEF District and Glenleven District are the Lomond Hills. Great for a hike and with the Pillars of Hercules at the foot of East Lomond makes a great place to stop for a bite to eat or camp.

NE Fife doesn’t have an official Scout Shop. The nearest is the Glenrothes Scout Shop . Visit the Glenrothes Shop to get expert advice from the volunteer leaders who run the shop. Our stock of uniforms never runs out and our prices are as cheap as on the internet. Plus you have the advantage of trying before buying!

This site uses Akismet to reduce spam. Learn how your comment data is processed.

The Scout Shop is managed by the Glenrothes & Levenmouth District Scout Council.
This site uses cookies: Find out more.